In 1893, Dr. Gilbert Hess, having trained and received degrees both as a Medical Doctor and a Doctor of Veterinary Sciences, teamed up with Ashland, Ohio business man J. L. Clark and the business of Hess & Clark was born.

Hess was the inventor and remedy developer and Clark was the salesman; and oh, did he sell! The duo became almost instantly successful due, in part, to Dr. Hess’ education, projecting superiority over inventors who produced “unscientific” medications, and Clark's outstanding marketing skill, traveling from town to town with horse and buckboard wagon leaving free samples with store owners which ensured later sales.

By 1897, the company had begun building what was to become one of the largest factories in Ohio and by 1915, Hess & Clark, Inc. employed 260 workers and 30 full-time salesmen. The two men quickly became successful and valued "paying it forward" to the benefit of their community by building a hospital, starting a student endowment, supporting the County Children’s Home, the American Red Cross, and several other local charities.

One of the best known products ever produced by Hess & Clark was Dr. Hess Udder Ointment. Originally developed for use on the farm, farmers were soon remarking as to the healing effect it had on their own worn out hands. Chronic dryness and cuts were quickly healing diminishing and their skin was softer than ever. 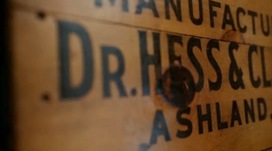 Hess & Clark experienced amazing success, but was eventually sold several times, each new owner reducing the amount of ointment being produced. In 1999, the product was no longer made and it appeared to be the end of an era.

Since then, the Dr. Hess brand has re-emerged in its hometown of Ashland, Ohio to pick up where Hess & Clark left off. Our natural formulations contain many of the same ingredients that have worked for over 100 years to moisturize and restore dry skin.

Our goal is to produce the best solutions for the dry skin conditions that so many people around the world deal with every day.